The Formation of Igneous Rocks and Minerals

The formation of crystals has as much importance to the healing properties as does the colour, system and shape. Minerals merge in Intense Heat and crystalization occurs in the Cooling Process. All Matter remains in Liquid State, as it cools it is unable to retain all the different substances in solution and some of the matter begins to precipitate out and the process begins with small “seeds” , afterwhich all liquid matter has become solid, homogenizes matter becomes a mineral and other substances that are mixed together become rock.

Size depends on time and cooling, crystals of minerals that are created during a volcanic eruption are considerably smaller  due to rapid cooling, hours or days.

Crystals formed deep in the Earth are larger and hundreds thousands or millions of years old. Rocks and minerals formed directly from magma are called igneous or magmatic rocks. These minerals are characterized by the fact that they were formed through the cooling and solidification processes. Volcanic origin and rocks of plutonic origin.

Vulcanite’s generally form fine-grained rocks containing minerals that produce only minute crystals. Well known among these are the lightweight “lava rocks”, such as pumice, which owe their structure to gases contained in the lava, or the more solid basalt, a very hard rock without gas bubbles. Vulcanite’s applied in healing with crystals are rhyolite, also known as leopard skin jasper or orbicular jasper. Fire opal is also formed here.

When lava cools extremely quickly it may even be that no crystals are formed at all. Instead, the entire lava mass is practically “frozen” through the temperature shock and the molten mass solidifies into a glass-like mass. This is how obsidian originates. Obsidian, being a mixture of many substances, is not strictly speaking counted among minerals, but is classified among the rocks; it is also called rock glass or volcanic glass. Because of the varied composition, the appearance of obsidian may vary from black to mahogany to silver. 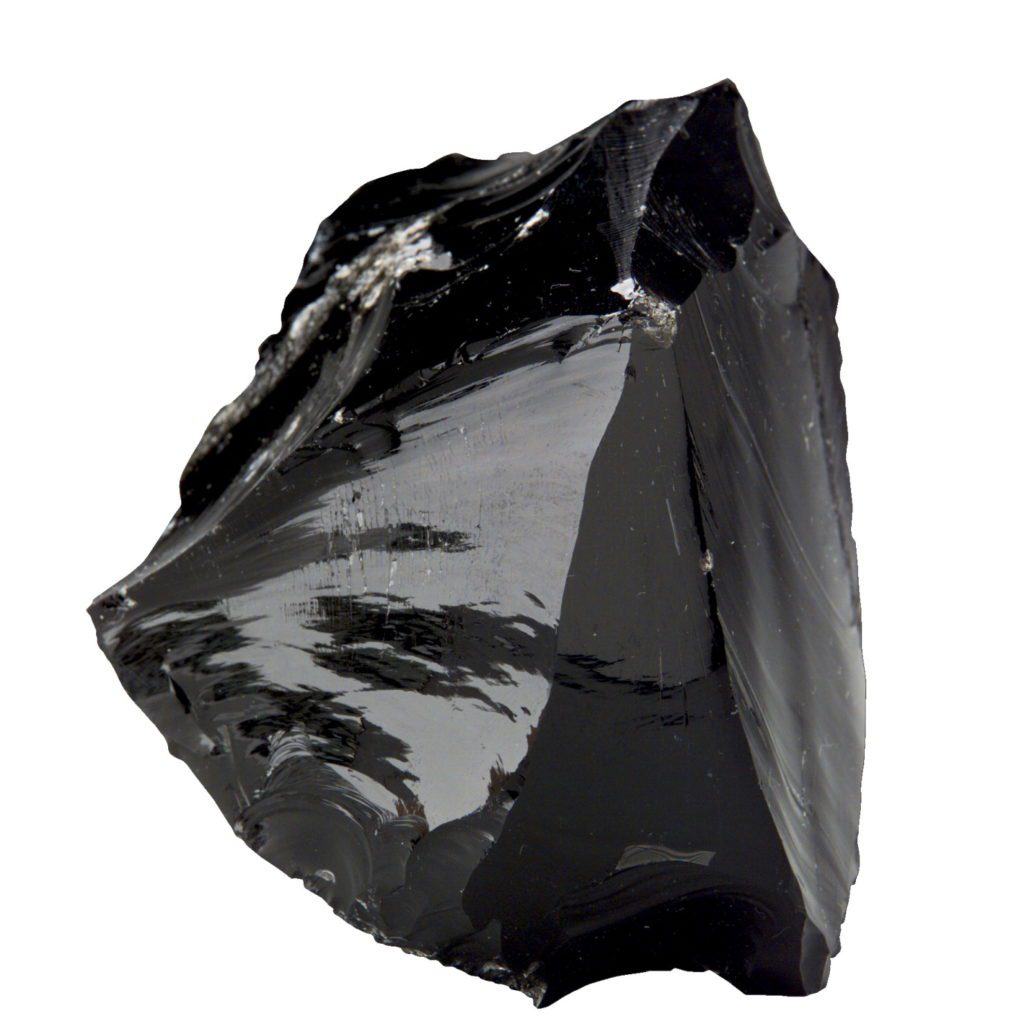 Among the Plutonites, not all of the minerals form at the same time. The first minerals start forming freely in viscous magma where, depending on their density, they are able to sink down or rise up. This is how magma differentiates, or divides up, and how certain minerals accumulate at certain depths and become concentrated there. This initial step in mineral formation is called “liquid-magmatic formation” which simply means “the formation of minerals from liquid magma”.

Sometimes, gases or vapors from the magma penetrate neighboring rock. This may also lead to mineral formation through substances dissolving out of the rock and forming compounds with the gases from the magma, this process is called “pneumatolytic formation”, and of this formation style. The following are applied in healing with crystals; apatite, lepidolite, topaz and tourmaline.

During the ensuing cooling phase, once the “critical temperature” of water at 375 degrees Celsius and below is reached, aqueous solutions result. Further minerals are then formed out of the substances dissolved in the water. Their formation is called “hydro-thermal”. Well known healing crystals that have been formed hydrothermally are among others, amazonite,aragonite, fluorite, kunzite and moonstone.

Because water is far more free-flowing than that of the magma, it is able to penetrate into cracks and fissures in the surrounding rocks. Here the minerals are precipitated as druses on the walls of cavities or clefts. The mineral solutions in these types of environment will only cool off very slowly owing to the insulation qualities of the surrounding rock. This means the minerals created here are able to form large, beautiful crystals; agate, amethyst, Citrine, Clear Quartz or Rock Crystal, chalcedony and Smokey quartz are formed in these fissures and clefts. 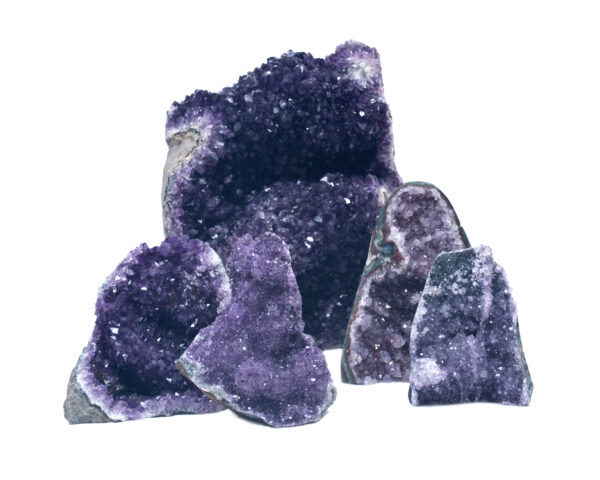 The principal of Igneous Rock Formation

The igneous formation principle demonstrates a crystallization process based on the cooling and solidification of liquid magma. The mineral-forming elements contained in magma represent the potential and predisposition for formation, as they already determine what can be formed. The crystallization process itself, however, is determined by the factors of pressure, heat, space and time, all of which decide in which manner the existing potential will be realized. As this is the oldest method of formation of rock, we will call the minerals so formed “primary” minerals.

The Formation of Sedimentary Rocks and Minerals

From the depths of magmatic formations up to the surface of the Earth will become clear that stones and rocks do not remain the same forever. The teeth of time are gnawing away at even the hardest rock, the sun and rain, heat and cold, frost and wind that do the “gnawing” gradually wearing the rock away. This action of wind and weather is called weathering or erosion. It leads to the second way that rock is formed.

Mountains are worn away by weathering. Rocks are spit off by the action of frost and turn into the rubble that is found on mountain slopes in the form of extensive gravel. This gravel will gradually gravitate towards the valley bottom, where it is transported away by streams and rivers. The flowing water serves to transform the angular pieces of rock of all sizes into round pebbles, by rolling them about against each other, knocking off their corners, grinding them down, and polishing them. During the process, myriad small fragments are created; this is sand, right down to the finest, dust-like, floating particles that we find in mud. A small amount of some mineral-forming elements are completely dissolved in the water, particularly chalk, for example, or rock salt.

Water can only transport matter as long as it is flowing. Wherever a river slows down, in lakes, river deltas or where it reaches the sea, it will deposit anything it has carried along. This kind of deposition is called sedimentation and the rocks formed in the process are called sedimentary rocks. Among these we find such healing stones as Anglelite, Anhydrite, Calcite, Dolomite, Oolite, Selenite (gypsum) and Pyrite. 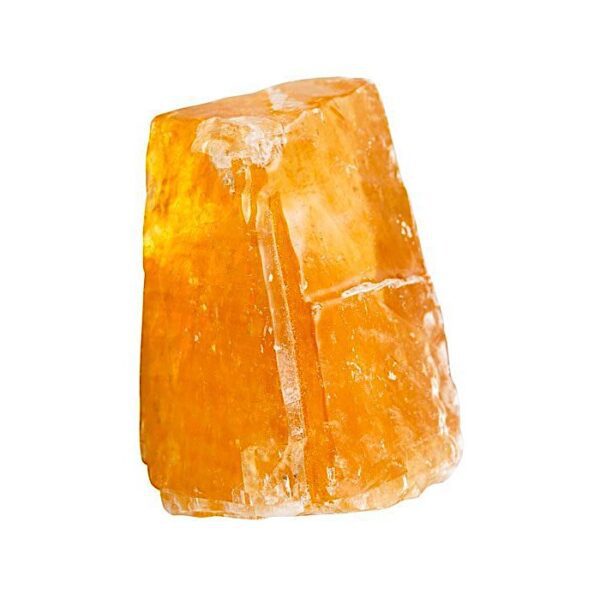 Wherever rocks are close to the surface of the Earth, surface water will penetrate them. This water carries oxygen, carbon dioxide or acids with it. It penetrates cracks and crevices and begins to dissolve the rock and release mineral-forming elements.

The mineral-forming elements that are released form compounds with other substances contained in the water and are then either deposited on the spot as new minerals or are transported away to be precipitated and deposited in deeper locations.

These processes occur in the zone between the surface of the Earth and the water table. The region above the water table is called the “oxidation zone” as oxygen from the air is still active at this depth. Typical minerals in the oxidation zone are, for example, Azurite, Malachite, Chrysocolla, Dioptase, Turquoise and Variscite. The region next to the water table is called the “cementation zone” as dissolved substances are precipitated out here. We find typical minerals like Copper, Silver and Covellite. 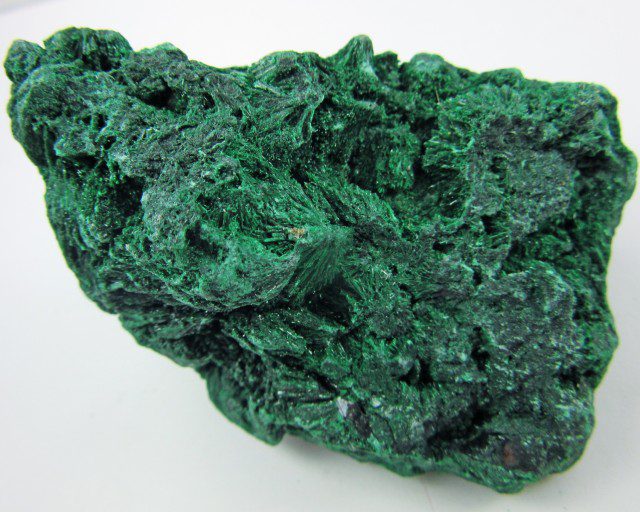 The Principal of Sedimentary Formation

The Sedimentary formation principle represents a process in which the solid structures of certain rocks are dissolved through environmental influences. The mineral-forming elements released out of the rock, together with other substances brought there through environmental activity, create new minerals. So we shall refer to sedimentary rocks as secondary minerals.

The Formation of Metamorphic Rocks and Minerals

Rocks pushed on together and on top of each other

Rocks are under extreme pressures

They were originally randomly interlocked begin to order themselves,

Order is brought out of chaos

Sapphaire and ruby in volcanic chimmy, pneumatolytic vapors can desolve certain elements out of the rock and replacing them with others, called “metasomatism”meaning an addition of new elements, minerals formed in this way are Charoite and Rhodonite, Falcons Eye and Tigers Eye. 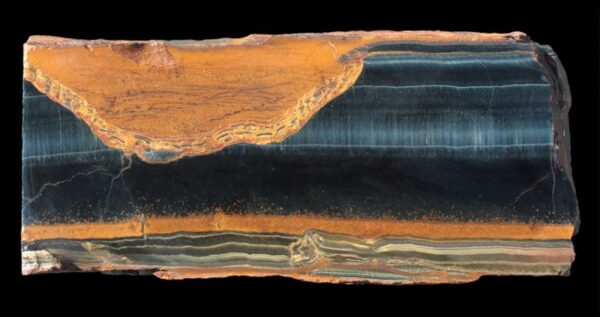 Transformation – Anything that cannot withstand the heat or pressure is changed, termed tertiary  minerals.

Can Crystals help with addiction ?