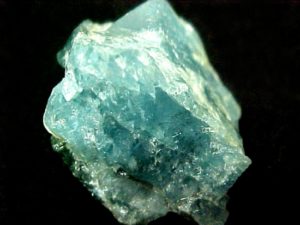 The name beryl is derived from a number of languages including Latin, old French, Middle English, Greek, Prakrit, German and Dutch.

Beryl is a mineral composed of beryllium aluminium cyclosilicate. They are hexagonal crystals and rarely come in terminated form. Beryl often crystallizes in a perfect six sided hexagons, their crystals are individual prismatic hexagons. The can appear in short stubby form or tabular and plates. The bases of beryls are flat and pyramidal terminations are rare.

Beryl has two varieties which include aquamarine, maxixe, emerald, golden beryl, yellow helidor, goshenite, pink morganite and red beryl. Pure beryl is colourless, it is the impurities which cause it to colour in variety.

Aquamarine is the second most popular gem beryl. It has a distinct greenish blue to blue colour which is caused by iron oxides within the chemical makeup of the stone. Light coloured stone in this colour range are still called aquamarine. The stone that are richly coloured are the most sought after. The pale stone are made for inexpensive jewellery.

The name Aquamarine derives from the Latin aqua marinus, meaning “water of the sea” and refers to its sparkling ocean-like colour. It was believed to be the treasure of mermaids and was used by sailors as a talisman of good luck, fearlessness and protection. It channels clear and heartfelt communication.

Aquamarine differs from emerald as it has fewer inclusions and fractures. Most costume jewellery is the eye clean without visible fractures. The colour of aquamarine can be enhanced through heating.

It is a stone of breath, the respiratory tract and lungs. It can help heal sinus conditions and coughing. It helps hay fever and other allergies. It relieves colds and bronchitis. As a cooling stone is helps counteract infections for laryngitis, strep throat or sore throat. It harmonises the pituitary and thyroid glands, regulating hormones and growth. It supports the healing of inflammatory diseases

It helps balance excessive anger or fear and, clears past emotional, physical or verbal abuse. It is useful; for transition and changes both physically and emotionally.

It is a calming, soothing and cleansing crystal. It helps overcome fear of speaking especially without anger in difficult situations. It bestows perseverance, discipline and light heartedness. It utilizes compromise and negotiation and gives courage and clarity.

It is a stone of natural justice.

It emits a gentle, compassionate energy, promoting moderation and responsibility for ones actions.

The magnetism on the moon will enhance the iron oxides in the stone increasing’s its forecasting abilities.