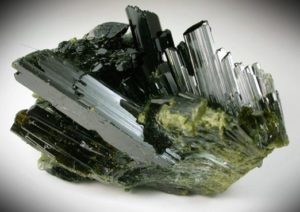 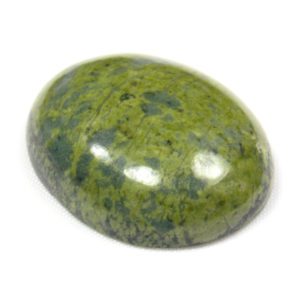 Epidote was named by Rene Hauy, a mineralogist at the University of Natural History in Paris in the early 1800’s. The name is from the Greek word “epidosis” which means “addition” referring to Hauy’s observation that some of the minerals prism faces are longer than others.

Epidote is one of the most outstanding display minerals. The most desirable form is in delicate elongated crystals which are interconnected and lustrous. It is found in horndels and skarns in contact metamorphic rocks, in metamorphosed limestone and in schist’s. It can also be found in igneous rocks in basalt and diabase. It has a complex crystal structure of isolated and paired silica tetrahedrons. It occurs as monoclinic crystals in pegmatites or long slender prismatic crystals in thick tabular crystals. They sometimes appear with etchings or growth layers and contain smaller later growth crystals. They are also found in massive form and as monoclinic crystals in marbles and schist’s that were formed or altered through contact metamorphism It is also sometimes found with amphiboles, feldspars, quartz and chlorite It is an abundant rock forming mineral.

Rocks composed of quartz and epidotes are known as epidosite. Epidote is often associated with allanite and piemonite. It is almost identical in composition to Clinozoisite.

It is usually found as a yellowish green pistachio colour. Sometimes it occurs in a brownish green black colour. In massive form it is translucent with a vitreous lustre.

Epidote helps increase energy and motivates strengthening of the physical body. It facilitates an assimilation of nutrients. It stimulates the immune system and aids in the healing process. It helps fortify the liver, gallbladder and digestive system; it regenerates after over exertion or illness. It increases personal power and memory retention.

Epidote is an attraction stone meaning it will bring you more of what you emanate.  It can be programmed to bring one what they wish for. It works for both positive and negative energies so one must be aware of themselves and their emotions…”you reap what you sow”. It increases perception and interaction with spiritual beings. It promotes a simple, calming grounding, “back to earth” vibration.

Epidote alleviates depression, hopelessness and negative thinking patterns. It promotes a sense of optimism and revival. It helps realise ones ideas of happiness and fulfilment. It brings patience, dissipates anxiety, self-pity and grief. It helps stimulate abundance, prosperity, manifestation, self awareness, will power, mental clarity, memory and emotional healing.

Epidote enhances the energy of whatever it touches.